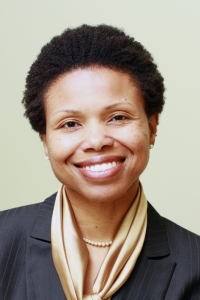 The Cleveland Central Promise Neighborhood, a local initiative focused on improving schools and educational opportunities for children from cradle to college to career, will be headed by Cleveland native Sonya Pryor-Jones.

Pryor-Jones, a graduate from Cleveland schools, officially started as director on June 18, and, with the Sisters of Charity Foundation of Cleveland, will help grow the Promise Neighborhood initiative.

The Cleveland Central Promise Neighborhood, inspired by the successful work of Geoffrey Canada and the Harlem Children’s Zone, is partnering with families, schools and other providers to build a strong academic “pipeline” of programs and services, and a strong future for this important neighborhood to Cleveland.

The goal of the initiative is to ensure every child in Central is ready for school, goes to good schools, and graduates from high school and goes on to college or other training then on to a career.

“We are excited to have Sonya join the foundation team as Promise Neighborhood Director. I want to personally express my thanks to my foundation team who have worked tirelessly over the past two years toward establishing a Cleveland Central Promise Neighborhood,” said Susanna H. Krey, president of the Sisters of Charity Foundation of Cleveland. “Sonya’s experience, expertise, and commitment to the project will be invaluable in supporting the implementation of the initiative with our many partners.”

Prior to joining the foundation and Promise, Pryor-Jones founded Synchronicity Consulting LLC, an education and organizational development consultancy that has worked with organizations such as the Cleveland Public Library and MAYA Design, Inc.

“This gives me an outstanding platform to continue the important work of eliminating the achievement gap, while also increasing college attainment by our urban youth,” Pryor-Jones said of becoming Promise Director. “I look forward to collaborating with partners from the public and private sector to deepen the foundation’s efforts in revitalizing the Cleveland Central neighborhood with all the benefits of a healthy and thriving community.”

The foundation applied last year as well. The DOE funded the top five scoring applicants. But Cleveland finished sixth, one spot out of the money, scoring 0.33 points behind the fifth place applicant, losing out on $15 million.

The foundation is also collaborating with Cuyahoga Metropolitan Housing Authority, which recently received a Choice Neighborhoods grant from the U.S. Dept. of Housing and Urban Development. Promise and Choice are complimentary federal programs focused on turning around distressed neighborhoods, with Choice focused primarily on the physical transformation of a neighborhood, and Promise on the educational and social transformation.

The Promise Neighborhood ¯ stretching from Euclid to Woodland avenues, from East 22nd to East 55th streets ¯ is an area of contrasts. The three elementary schools in the area are in academic emergency, 80 percent of the children live in poverty. The neighborhood has the greatest share of people living in public or publicly subsidized housing in the area. But there’s also a community college, a state university, a hospital, and numerous churches, and businesses in that area too.

Prior to starting her own consulting company, Pryor-Jones was the executive director of the Metropolitan Cleveland Consortium for Science, Technology, Engineering, and Math at Case Western Reserve University, the regional hub for the Ohio STEM Learning Network.

The public-private partnership was established to promote and amplify STEM education in Northeast Ohio. While executive director, Pryor-Jones secured over $3.5 million in funds, led the design and opening of two new Cleveland Metropolitan School District high schools, and provided support to over a dozen schools and out-of-school STEM programs.

She also managed the establishment of the MIT (Massachusetts Institute of Technology) Mobile Fab Lab 2.0 ¯ a small-scale workshop equipped with computer-controlled tools and equipment that allows students the ability to design "almost anything." The mobile lab travels to local schools with the recent support of KeyBank.

Pryor- Jones is a graduate of Kenyon College and has a Master’s in Education from Cleveland State University.

Joan Mazzolini is communications director for the Sisters of Charity Foundation.