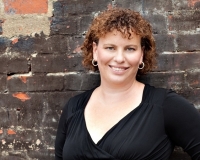 Trinity Cathedral will have a Dean's Forum Sunday, November 24 at 10:10 a.m. with Anne Trubek of Rust Belt Chic.

Rust Belt Chic Press is a creative-based Cleveland small business. It is a print book series and an online platform for high-quality edited literary work. It is an ideal that binds creative minds living in the post-industrial Midwest. It is a method by which its organizers create, collect and disseminate the stories and written history of the city of Cleveland.

Anne Trubek is a mother, author and Writer in Residence at Oberlin College. Her previous book, A Skeptic’s Guide to Writers’ Houses, has been hailed as “a remarkable book: part travelogue, part rant, part memoir, part literary analysis and urban history.” The Wall Street Journal called it “relentlessly witty.”

Trubek also published and co-edited Rust Belt Chic: The Cleveland Anthology in September 2012. This book is on its second printing. She is currently writing The History and Uncertain Future of Handwriting which is expected to be published next year. Additionally, she has published articles in The New York Times, The Atlantic, Wired and other publications. Trubek has appeared on NPR’s Weekend Edition, The Diane Rehm Show, Talk of the Nation and elsewhere.

Trubek serves on the board of the National Book Critics Circle. A Shaker Heights resident and Cleveland booster, she is also an avid gardener and a constant user of Twitter.

Find out more about this event and others at www.trinitycleveland.org.