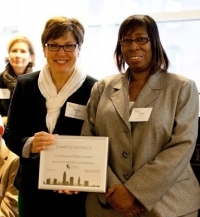 Wendy Hoke, a member of the executive committee of the CDI board and senior director of marketing and communications at St. Vincent Charity Medical Center, presented the Outstanding Leadership Award to Councilwoman Phyllis Cleveland for her work on the East 22nd Street infrustructure project and the CMHA Choice Neighborhood Plan.

Over 100 civic leaders, business people, anchor institution representatives and community stakeholders filled the Community Room at the Plain Dealer on November 22 to attend the Campus District, Inc. Annual Meeting. The meeting also commemorated the 30th anniversary of the founding of the St. Vincent Quadrangle in 1983, which eventually became the Campus District, Inc. (CDI).

Dr. Michael Schoop, president of the CDI Board of Directors (president of the Cuyahoga Community College Metro Campus), welcomed the audience and introduced Bobbi Reichtell, executive director of CDI. Reichtell gave a report on the work of the Campus District over the past year and the recent large investments in the Campus District by private developers and institutions.

She pointed to the student housing opportunities that are continuing to expand with a warehouse in the Superior Arts Quarter being renovated by Dave and Karen Perkowski to provide loft units to accommodate 140 students, adding to the new 600-bed Langston apartment project on Chester Avenue developed by Guy Totino of Polaris Real Estate Equity and Buckingham Properties.

Reichtell also discussed Cleveland State University, which opened its new NEO Medical school this past year in the historically renovated 1836 Euclid building done by Tom Kuluris of Liberty Development. CSU is about to break ground on a $45 million Health Careers building. Cuyahoga Community College relocated its Marketing and IT Services to the newly renovated Jerry Sue Thornton Center on 22nd Street and Cuyahoga Metropolitan Housing Authority is changing the face of the Cedar Estates through demolition and new construction, improving the lives of hundreds of families.
They are building on more than $50 million of investment at Tri-C’s Metropolitan Campus.

Reichtell described the work ahead that the Campus District plans to do, based on the 2014-2016 Strategic Plan adopted by the Board of Directors on October 17, 2013. The plan includes redevelopment of
historic buildings such as the vacant Juvenile Court building, new infrastructure,
widening the East 22nd Street bridge over the Innerbelt to include a greenspace buffer to the highway and finding a permanent home for the Campus International School, which is temporarily located
in CSU’s Cole Building on Chester Avenue.

Importantly, CDI intends to expand its organizational capacity by aligning with Downtown Cleveland Alliance to bring their experience and technical assistance to the district in areas of marketing, real estate development and business attraction. Wendy Hoke, a member of the Executive Committee of the CDI Board and senior director of marketing and communications at St. Vincent Charity Medical Center, then presented awards to the following individuals and organizations:

• Leadership Award to Councilwoman Phyllis Cleveland for her work to generate City of Cleveland support and funding for the East 22nd Street infrastructure project that will start in Summer 2015.

• Myron Pakush, director of Ohio Department of Transportation District 12 (accepted by Howard Huebner, highway management administrator), for 21 days of brush and overgrowth removal at the Superior entrance to the Innerbelt to prevent homeless encampments from starting again.

• Roby Simons and CSU Levin College of Urban Affairs for their urban planning graduate students’ work on a housing market study and master plan for the Campus District.

• Terry Schwarz and David Jurca and KSU Urban Design Collaborative for their study of the Campus District’s barriers
and assets to biking and walking.

• Visionary Award to Jeffery Patterson and Cuyahoga Metropolitan Housing Authority (accepted by Scott Pollock,
director of planning and development at CMHA) for their bold and progressive plans for redevelopment of the Cedar Estates in the southern portion of the Campus District.

The election of officers was conducted by President Michael Schoop and the board unanimously voted for the proposed slate of officers: Dr. Byron White as president (beginning in June 2014; Dr. White is CSU’s VP for University Engagement), David Kauffman as vice president (Mr. Kauffman is co-owner of Brother’s Printing); Jerry Valco as treasurer (Mr. Valco is CEO of Ohio Educational Credit Union).

Jack Boyle, a loaned executive from CSU working as the Campus District’s interim real estate director, introduced the keynote speaker, Fred Geis. Geis is co-owner of Geis Companies, one of the key real estate developers in downtown Cleveland and Midtown. Geis outlined the company’s millions of dollars of successful real estate development in the suburbs of Cleveland and around the country but described how the last 4 to 5 years of developing in Cleveland have been the most fun and satisfying.

He spoke about the critical role played by non-profit community development corporations like Midtown Cleveland, Downtown Cleveland Alliance, and Campus District, Inc. in supporting key pre-development work by providing a market analysis, plans, and an overall vision for the neighborhood. He talked about the challenges in creating Midtown Tech Park Campus in the Health-Tech Corridor and the role that the City of Cleveland Economic Development Department and Midtown Corridor played in bringing necessary financial resources to make the project feasible.

He shared his plans for the Ameritrust complex at East 9th and Euclid but was the most animated when speaking about the Campus International School. Geis stated, “Through my experience speaking with both Clevelanders and suburbanites, quality education options is a key driver for any young family to move to the city. That is why I believe so strongly that the Campus International School is a critical component of the growth and next phase of re-investment in our city.”

Bobbi Reichtell is the executive director of the Campus District, Inc.