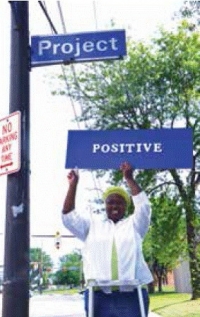 La Queta Worley holds up a sign for "Positivity Street."

Yet a name like Project carries a lot of negative connotations that can be hurtful to the people who live there. For 13 years La Queta (Keeta) Worley lived on a street named “Project”. She hated the name. Although she no longer lives on that street she still hates the name.

Recently La Queta and I shared a conversation about our dreams for the Central neighborhood. I mentioned that I would love to see the Project street sign taken down. That’s when I learned that she had previously lived on that street and has wanted the same thing for many, many years. I know I would have brooded about that sign every time I saw it but probably wouldn’t have done anything about had it had not been for La Queta. When two or more people come together to share their dreams and aspirations, courage, energy and power are magnified.

Together we decided to see if we could make it happen. Our first strategy was to take a picture of La Queta at the signpost and send it to the City. As La Queta stood pointing at the street marker holding a sign that said “Dump Project,” a woman who lives on the street drove up and screamed with glee. She said, “Are you going to take that awful sign down? I hate telling people my address. It’s terrible having to say I live on Project!”

We have talked about having a street naming contest. If we do La Queta will vote to change the name to Positivity! After all isn’t that what we want to see happen on the street? What other ways can you think to create positivity on our streets? We would love to hear your ideas.

Jan Thrope is a local writer and community activist.